For our first profile of the fall semester, we would like to look back and highlight some of the amazing seminar speakers from last semester. We had a fantastic lineup of speakers, a number of whom hold identities typically underrepresented within the field of entomology. In addition to sharing their fascinating research, several speakers talked about their work on diversity, equity and inclusion. Below, we highlight the initiatives that two of the speakers shared with us and provide links for more information. At the bottom, you can find the list of other seminar speakers from last semester with links to recordings of their seminars. 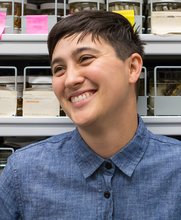 In addition to teaching us about scorpion diversity and evolution, Dr. Lauren Esposito spoke about how their/her intersectional identities inform their/her advocacy work to advance diversity, equity and inclusivity in STEM. The heterosexist culture of academia, STEM fields and American society at large along with their/her own sense of isolation as a queer scientist led them/her to start a visibility campaign called 500 Queer Scientists. The twitter feed (@500QueerSci), instagram (500QueerScientists), and website (www.500queerscientists.com) of the campaign provides connection and affirmation for hundreds of queer scientists. Additionally, Dr. Esposito was a founding member of Entomologists of Color in June 2020, which encourages young entomologists of color by providing society memberships, facilitating a mentorship program at ESA, and celebrating entomologists of color on their website (www.entopoc.org). Finally, Dr. Esposito had these recommendations for allies: 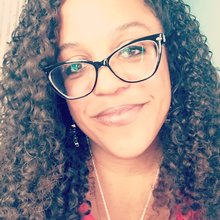 Dr. Jessica Ware, an evolutionary biologist currently working at the American Museum of Natural History Invertebrate Zoology, gave a fascinating talk on her research into the evolution of Dragonflies, Damselflies, Termites and Cockroaches. She also spoke on some of the initiatives she works on in efforts to diversify the field of entomology. She particularly called out the fact that the numbers of PhDs in entomology from different demographic groups are lower than what we would expect based on the human population. Along with Dr. Esposito, Dr. Ware is one of the founders of Entomologists of Color (www.entopoc.org). Additional initiatives of the group that she mentioned are a multilingual journal club, an entomology job board and scientist of the month feature. She was also involved in the Black In Entomology week held from Feb 22nd to 26th, 2021 where great discussions were had on a variety of topics such as access to green space, capacity building, colonialism in entomology, entomophagy, discussions on how to get into graduate and undergraduate programs. There is a BlackinEnto playlist on youtube of these conversations for those who missed the event. Further information on the Black in Entomology initiative can be found on the BlackinEnto website.

Here is a list of other invited speakers we had last spring, along with their websites and a link to their presentation:

Dr. Vanessa Lopez
US Forest service
websites: https://www.fs.fed.us/foresthealth/contact-us/index.shtml, and https://www.researchgate.net/profile/Vanessa-Lopez-3
Recording of seminar April 27, 2021: https://www.youtube.com/watch?v=d9xbIZOUpwI
Seminar title: From Axes and Boots to Cubicles and Heels: A Story About My Path From Field-Based Academic Research to Managing National USDA Programs Focused On Forest Health 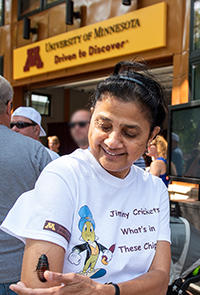 Sujaya (she, her, hers) was born in Bombay (Mumbai) in India. She is the second child in a family of four girls. She attended Irish missionary convent schools and grew up in four towns in India: Simla, Madras (Chennai), Delhi, and Bangalore. She obtained her undergraduate and master’s degrees in zoology at Delhi University. It was during her master’s degree that she first encountered entomology - students had to specialize in a branch of zoology, and she chose entomology. Her excitement for entomology was sparked by an insect collecting field trip in East India, during which she spent quite some time chasing a cicada; she did not catch the cicada, but she caught the entomology bug!

After completing her master’s degree, Sujaya taught undergraduate zoology at Delhi University. She then worked at a plant quarantine research laboratory (National Bureau of Plant Genetic Resources) where she compiled a catalogue of bruchid seed pests; subsequently she conducted research on pest management of ornamental and medicinal plants at the Indian Institute of Horticultural Research in Bangalore. Sujaya joined Richard Jones’ lab at the University of Minnesota to pursue a PhD in entomology, during which she investigated the attraction of Macrocentris grandii, a braconid parasitoid of the European corn borer, to plant volatiles. She had two postdoctoral positions, first at the University of Delaware where she examined chemical cues that drew European corn borer females to host plants, and then at UC Berkeley where she evaluated biological control of the western tarnished plant bug in strawberries with inundative releases of a mymarid, Anaphes iole.

Sujaya worked as the strawberry Extension Adviser for UC Cooperative Extension before being hired as a faculty member at Oregon State University to work on pest management of grass seed crops. Her serendipitous observation that a particular blue trap did not capture the pest but drew an extraordinary diversity and abundance of native bees led to her expanding her research to bees as well. She took on numerous leadership roles including directing NSF funded GK-12 and REU, and other student-centric programs. These led to her interest in applying for the position of head of the department of entomology at the University of Minnesota, where she was selected as the first alum, first woman, and first person of color for the role. Currently, besides leading the department, she is engaged in teaching courses, and in promoting entomophagy, the practice of humans eating insects as food.

Throughout her career, every position has had opportunities and challenges; what has been exciting about each one was learning something new! Sujaya is very passionate about entomology and had this to say about it: “When you enjoy what you do, there is no boundary between work and fun”.

Ph.D. student in the Department of Entomology 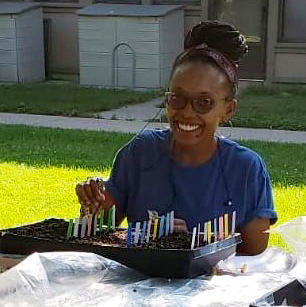 Dora was born in Taita-Taveta county of the Coast Province, Kenya, to young parents who later entered professional careers and moved the family to Nairobi. The oldest of two, she attended a female boarding school through high school in Nairobi before moving with her parents to Botswana to complete her A-levels. She said that she really likes the culture and vibe of Nairobi – it is fast-paced and chaotic and incredibly stimulating. She enrolled at Rhodes University at Grahamstown, in the Eastern Cape Province of South Africa near Port Elizabeth, where she majored in microbiology and biochemistry and followed that with an honours degree in microbiology where she worked on the generation of polyclonal antibodies against the VP1 protein of Theiler’s Murine Encephalomyelitis virus (TMEV) GDVII. After completing her undergraduate degree, she interned with the prestigious KEMRI-Wellcome Trust programme, where she worked on a project to assess malaria prevalence in Ganze and Junja in the Coast Province of Kenya. She joined the University of Pretoria to complete a Master’s Degree in genetics in the Forest and Agricultural biotechnology institute on the population genetics of the tree-killing fungus, Chrysoporthe austroafricana in Southern Africa. Her work was to evaluate if this fungal disease was endemic to the southern countries of Africa or if it invaded with the establishment of the exotic eucalyptus trees that had been planted throughout the region. Using microsatellite markers, she found the greatest genetic diversity on native trees, indicating that the fungus was probably a native as well. After her Master’s, she joined the University of Minnesota in the forest entomology lab of Brian Aukema, where she is completing her PhD on the associational protection and potential non-target effects of systemic insecticide treatments against emerald ash borer.

Dora never thought she would work with insects, ever. She stumbled into our field. During her Freshman year, she took a Zoology course that made her kind of interested in insects, but she was committed to microbiology and biochemistry. However, during her internship at KEMRI-Wellcome Trust, she worked in a lab that reared mosquito colonies and developed an interest in working on arthropod vectored disease. Despite whetting her interest, her Master’s research was not at all entomological. The real eye-opener came because her Master’s program required her to participate in a field project, which was under the direction of a graduate student. Dora accompanied this student to the field to study some tree-feeding weevils and she found this to be very interesting and asked questions about insects incessantly. From that point on, Dora was committed to learning more about insects.

Dora joked that she didn’t know she was black until she moved to South Africa. Until that time, she did not know that race was such a major thing, imbued in the culture and affecting all social interactions. She feels that it is even more pronounced in the United States even though her experiences are tempered by being mostly in academic social circles. Nothing is overt, but when some people don’t understand her, they respond by shouting or speaking more slowly, She also confided that, like many of us, she sometimes lapses into imposter syndrome, where she starts to feel that she is not deserving and does not belong. However, she uses behavioral strategies to mitigate these feelings by focusing her efforts to learn from the amazing people she gets to interact with. Clearly, we all can learn something from Dora.

Nominate someone for a future profile