Burying beetles (Nicrophorus spp., also known as sexton beetles) are large, brightly patterned insects. They are black with bright orange or red markings on their elytra (hardened forewings), and sometimes behind their head, face, or tips of their antennae. They also have clubbed antennae, which help them detect their food.

As suggested by their common names “burying” or “sexton” (gravedigger) beetles, these beetles bury and eat animal carcasses. Male and female partners will find a small dead animal, such as a mouse or bird, and work together to bury it underground. The female lays eggs on the carcass, and both beetles secrete antibacterial and antifungal compounds that keep the carcass fresh. Once the larvae hatch, they are dependent on their parents for food — burying beetles are part of only a small fraction of insects that actively care for their young! The parents will regurgitate food for the larvae until they’re old enough to leave the burrow to undergo metamorphosis.

Burying beetles are found throughout the northern hemisphere, and there are many species that live in Minnesota. They may be found on fresh carcasses, but they spend most of their time in burrows.

Decomposers help cycle nutrients from dead organisms back to living ones. Burying beetles help to keep Minnesota’s natural ecosystems healthy! The University of Minnesota’s Insect Collection also houses the last known American carrion beetle (Nicrophorus americanus) found in Minnesota in 1969. This species is endangered in the U.S., and appears to have been completely wiped out of Minnesota.

You may sometimes see burying beetles covered in little red mites! These beetles and mites actually have a mutualistic symbiotic relationship: the beetles bring the mites to new carcasses, and the mites feed on fly eggs that have been laid in the carcass. The beetle benefits by using the mites to remove competition for the carcass, leaving all of the meat for their larvae. 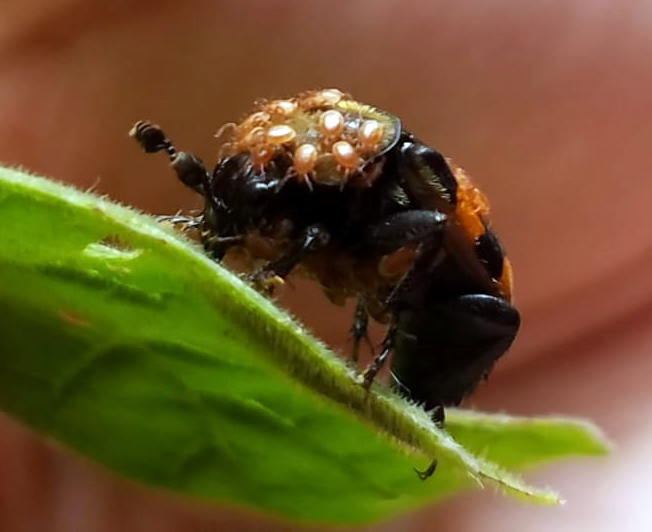 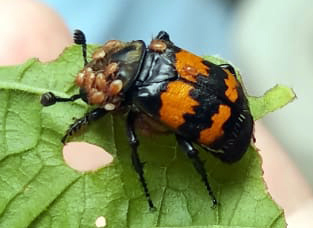