Sphex pensylvanicus is a species of digger wasp approximately 22-28 millimeters in length. Their common name, Great Black Wasp, does this insect descriptive justice with its deep black body and wings that give off a blue iridescent sheen. They have long segmented antennae, tiny pinched waists, large compound eyes, and strong chewing mandibles. Females wield a stinger for paralyzing prey and are a few millimeters larger than males. Their bodies are also covered in many fine hairs that collect pollen during their trips to the garden.

The adults drink from nectaring flowers while hunting for prey items for their young. The adult females are active hunters that paralyze and carry their prey back to the nest for their brood. Their prey consists of many insects in the Orthoptera order (crickets, katydids, and grasshoppers). The larvae of the Great Black Wasp will slowly eat away at the prey’s paralyzed body over the course of a week while it is still alive.

Where and when to find them

Great Black Wasps occur across the majority of the United States except the Pacific Northwest. They can commonly be found patrolling flowering plants during the summer especially during July and August.

Like other digger wasps, the Great Black Wasp females build their nests in the ground. As a solitary species with no hive or sister workers, the female will dig about a foot beneath the soil and create a series of tunnels using her mouth and spiny legs. Each chamber is assigned an egg and a paralyzed insect to go with it. As soon as the larvae hatch, they will have a delicious meal to feed on as they develop. They develop into pupae near the end of fall and overwinter in their burrows until the following summer when prey and nectar are plenty. Once adults, the males leave the nest to mate and mated females will go on to start their own nests.

In her mission to feed herself and her larvae, a female Great Black Wasp will clean up your garden of herbivorous pests and pollinate flowers into the early fall!

Are they a threat to you?

Many people flee at the sight of this large wasp, especially given the threatening color and size. However, while the females of this species can give a painful sting, these insects are typically unbothered by humans minding their business and will only sting if threatened. Males do not have a stinger. Those who experience allergic reactions to insect stings should treat them with caution like any other stinging insect. Admire from a distance! 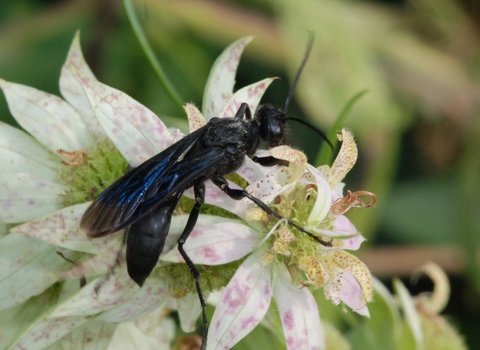 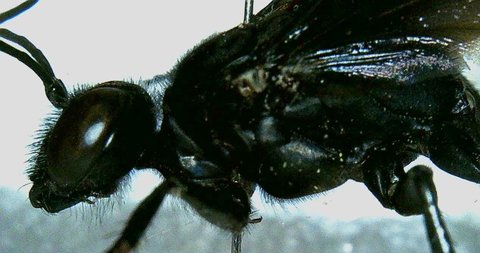 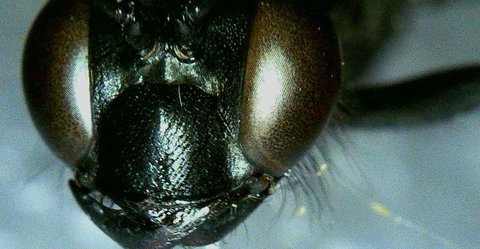