At 8 to 11 millimeters in length, jagged ambush bugs (Phymata species) are small and mighty garden predators. Adults have an angular, greenish yellow, white, and brown bodies with small wings that leave the jagged sides of their abdomens exposed. Their forelegs are thickened with muscles and resemble the raptors of a praying mantis; like mantids, those legs are used to snatch and hold prey. Ambush bugs have short beaks that pierce into their prey and secrete saliva to dissolve the insect’s internal organs. The final segment of their antennae is slightly clubbed.

Where to find them

Jagged ambush bugs can be found throughout North America in southern Canada, most of the United States, and northern Mexico. They can often be seen in open meadows and gardens on the flowers of prairie plants like goldenrod and aster, where their body coloring will keep them hidden from potential prey.

Although smaller than their wheel and assassin bug cousins in the Reduviidae family, jagged ambush bugs are still voracious predators. As the name implies, they ambush their prey by sitting motionless and waiting for the right insect to pass by. These can be flies, small moths, beetle larvae, and other soft-bodied true bugs who are attracted to the plants the Phymata species sit on. They are also capable of catching prey much larger than themselves like bumble bees and butterflies.

Jagged ambush bugs begin as dark, barrel-shaped eggs on leaves and stems. Phymata spp. undergo a simple metamorphosis, with the nymphs appearing like smaller, wingless adults that reach maturity after four molts. Mated females are often seen with their smaller mate riding on their backs. There is generally only one generation per year, but adults and their eggs can overwinter.

Jagged ambush bugs are beneficial to have in your garden because they prey on pest species such as thrips, aphids, and caterpillars.

There are two common species of jagged ambush bug in Minnesota: Phymata americana and Phymata pennsylvanica. It can be difficult to distinguish one from another just by appearance, even for experts.

Despite having wings at maturity, they are poor fliers 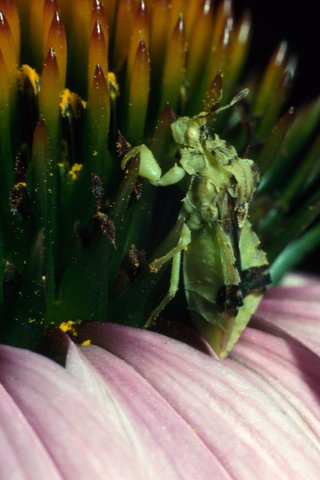 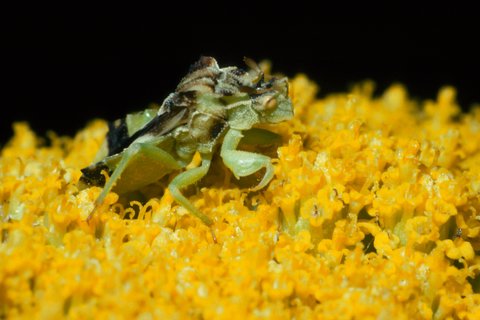 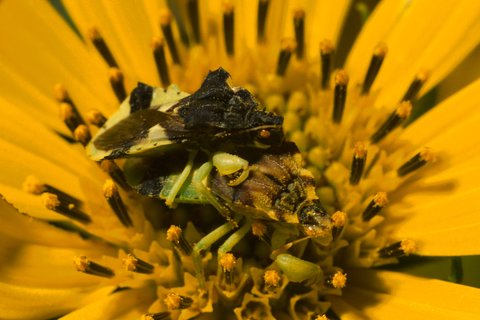