Six-spotted tiger beetles (Cicindela sexguttata) are striking metallic green, sometimes blue, beetles with long legs, large sickle-shaped mandibles, and large bulging eyes. They are named for the six small white spots at the edges of their elytra (wing covers), although the number of spots varies – beetles may also have two, four, eight, or even no spots. They are around half an inch (12-14mm) in length.

The larvae are whitish and grublike with a dark head and large mandibles. Larvae create a vertical burrow, which can be up to 2 feet (0.67m) deep. They have hooks on their abdomens that they use to anchor themselves to the inside of the burrow, so they can lunge at and capture prey without getting dragged out.

Adults and larvae eat many kinds of insects and other arthropods. Adults are active hunters, chasing down prey. Larvae are ambush predators, lunging at prey from burrows in the soil.

Where and when can you find them?

Six-spotted tiger beetles are active from spring into early summer. Look for them in forests and nearby fields. They are especially common on trails and other sunny areas. Adults overwinter in their larval burrows. The larvae are rarely seen, as the beetle spends this stage of its life cycle entirely underground.

As a predator, six-spotted tiger beetles contribute to natural control of insects and other arthropods. Because of their iridescent green color, they are sometimes confused with emerald ash borers, an important invasive borer of ash trees. However, their body shape and quick movements help distinguish them from slow-moving emerald ash borers.

Tiger beetles’ long legs allow them to dart across the ground at high speeds. In fact, they can run so fast that their eyes can’t keep up, rendering them momentarily blind. This is why they only run short distances at a time. 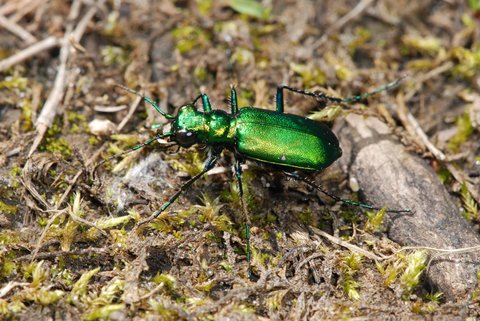 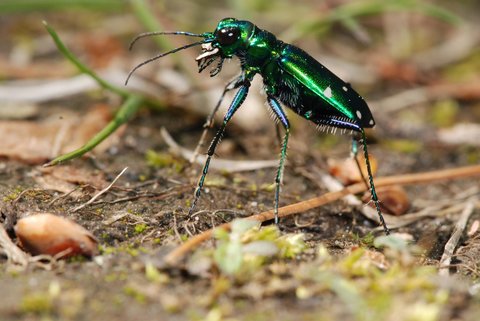 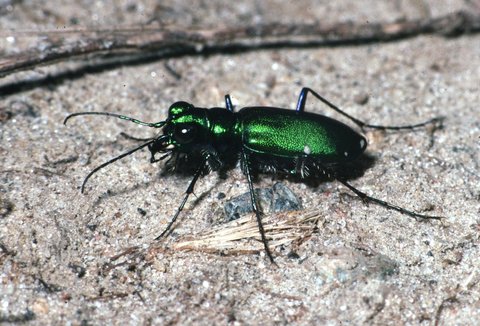