A primitive insect, the snow flea (Hypogastrura nivicola) is a very small, about 1/10 inch long and dark blue-gray. They have a somewhat plump body and have small compound eyes comprised of only eight facets in each. Snow fleas are wingless but can jump.

How do they jump?

A type of springtail, snow fleas can jump by using a forked appendage held under their abdomen called a furcula. Facing forward, this furcula is held in place by a clasplike structure known as a retinaculum. When the furcula is released, it propels the snow flea up and forward. A snow flea can jump up to several inches.

Snow fleas live in the soil and leaf litter where they eat microscopic fungi, algae, and decaying organic matter. Even though they are very abundant, they go unnoticed during the summer.

However, snow fleas have a higher tolerance for colder temperatures compared to typical insects; as the snow starts to melt in late winter, they are able to move up through breaks in the snow. You can find them on top of the snow in potentially large numbers, at times literally turning snow black. Watch for snow fleas especially around the base of trees.

Despite their name, snow fleas are harmless to people. They are beneficial because they help to break down organic matter, helping to enrich the soil. They are mostly a curiosity; people are surprised to see insects active on snow during winter.

However, snow fleas are attracted to maple syrup and can sometimes be pests in buckets of sap when it is being harvested.

Researchers at Queen’s University in Canada have examined the anti-freeze protein that allows snow fleas to be active at colder temperatures. They believe that by better understanding these proteins, similar ones can be used to better store transplant organs and even make better ice cream! 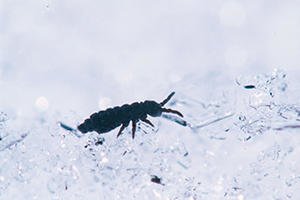 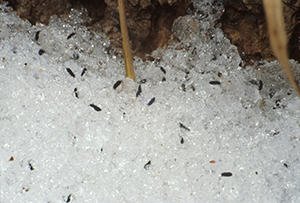