Wasp mantidflies (Climaciella brunnea) are delicate, slender insects that are a little over an inch long. With their yellow and brown striping, triangular-shaped heads and raptorial (grasping) forelegs, they look like a cross between a praying mantis and a paper wasp. However, despite their appearance and name, they are neither wasp nor mantis. They belong to an entirely different group called the Neuroptera, or nerve-winged insects — which includes the lacewings, owlflies, antlions, and others.

Adults are generalist predators, and feed on smaller insects, including other mantidflies. They use their forelegs to grasp and hold their prey as they eat, much like a praying mantis. They also feed on nectar and tree sap.

Larvae are parasitoids of spiders. Adult females lay individual eggs at the ends of short silken stalks on the underside of leaves (as many as several thousand). The eggs hatch and each tiny larva waits for a passing spider. The larva readily boards a passing spider, where it rides around, subsisting on the spider’s blood until the spider lays an egg sac. The tiny larva crawls off the spider and into the sac as the eggs are being laid. Once securely inside the completed egg sac, the larva will feast on the spider eggs until it pupates. A single wasp mantidfly develops within the egg sac. Their life cycle takes about a year to complete.

Where and when you find them?

These insects are found across the US, north into Canada, and south into Mexico. Adults emerge in late spring and inhabit lightly wooded areas with open edges and are commonly found on vegetation and flowers. Males are short-lived and are typically only found in spring. Females live longer and can be found later into the summer.

Wasp mantidflies are generalist predators as adults and won’t have an impact on any specific group of insects; but in areas where they are common, they will reduce spider populations because entire spider egg sacs are consumed.

Adults are similar in size and coloration to paper wasps. When disturbed, they will move their abdomens in a pumping-motion that resembles an aggravated wasp preparing to sting. They will also spread their wings, lean forward, and position their abdomens upward while continuing to throb in a stinging motion. They do not possess a stinger. When an otherwise harmless species mimics the physical attributes of a dangerous species — this is called Batesian mimicry.

Praying mantises are members of an unrelated order, the Mantodea. The characteristic raptorial forelegs and triangular heads with large eyes of each group developed separately; meaning mantidflies and praying mantises each independently evolved similar characteristics from different ancestral lineages. This is called convergent evolution. 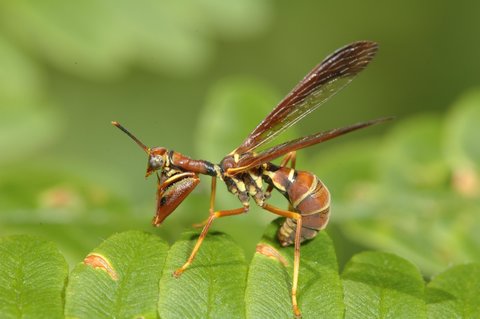 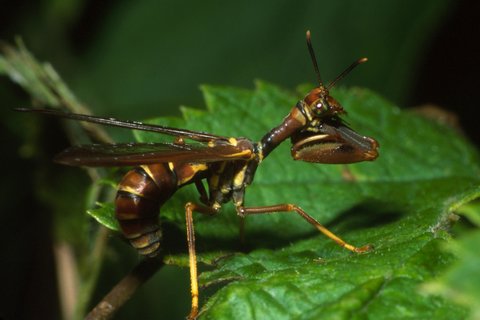