The western conifer-seed bug (Leptoglossus occidentalis) is a robust insect, about ¾ inch long with a reddish brown body and a white zigzag line across the center of its wings. It has long, conspicuous back legs although they are not used for jumping. Each leg has a distinctive leaf-like enlargement on it. In fact the group of insects a western conifer-seed bug belongs to is called the leaffooted bugs.

Where and when do you find them

Western conifer seed bugs are found on pine and Douglas fir during spring and summer, feeding on green cones and needles. However, they are usually not noticed during warm weather. The adults commonly enter homes and other buildings during fall; they can be occasionally seen walking sluggishly indoors during winter and early spring.

Fortunately, western conifer seed bug feeding causes little or no damage to evergreens. When found indoors, they are just a nuisance. They are not interested in biting people and do not transmit any disease. They also do not damage any property and typically occur in just small numbers (unlike boxelder bugs and lady beetles). They do not reproduce indoors; the insects you see in the winter came into your home during the fall.

Western conifer-seed bugs can be mistaken for cockroaches which a serious indoor pest. They are also sometimes confused for kissing bugs, which can transmit Chagas disease, a potentially fatal disease.

Western conifer-seed bugs are not native to Minnesota but originate in the western U.S. They have been gradually expanding their range westward since the 1950’s. They first started arriving in Minnesota in the late 1980’s and early 1990’s. 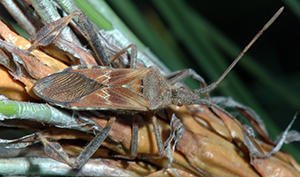 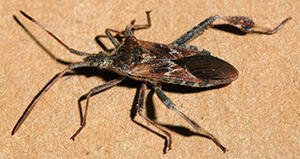